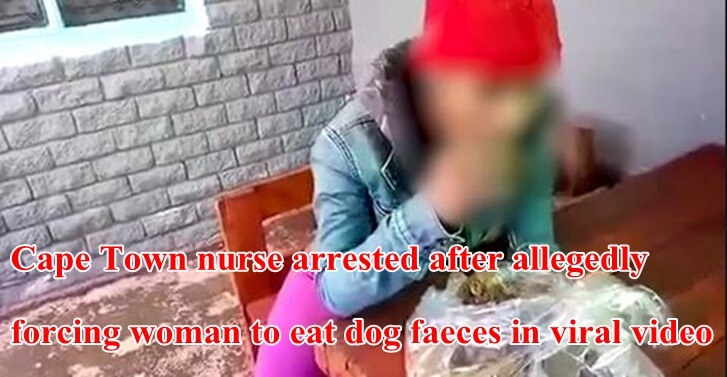 A Cape Town nurse has been arrested after a video surfaced of her allegedly forcing a woman to eat dog faeces.

The 38-year-old woman was arrested on Friday morning and appeared in court the same day, said Captain FC van Wyk.

Elizabeth Williams, from Elsies River, would remain in custody until her next appearance in the Goodwood Magistrate's Court later this week, theÂ Daily VoiceÂ reported.

South Africans reacted with outrage after a four-minute video emerged of Williams allegedly forcing another woman to eat the faeces as punishment for sleeping with her boyfriend.Â Â

When the seated woman reluctantly takes a bite, she is told:Â "Daarsy" (there you go).Â

She starts to gag and the nurse warns her not to vomit because her home is clean.

The seated woman makes more noises, holds her throat and appears to be gagging.

She is told to swallow and to keep going: "Jy kan hulle uitkies, sag, hard, pap, enige iets." (You can choose, soft, firm, runny, anything).

At the end of the video, the nurse turns the camera on herself and appears to warn her boyfriend, telling him to look at what the woman is doing.

The 27-year-old victim opened a case of assault with intent to do grievous bodily harm, intimidation and crimen injuria last week.

The SA Human Rights Commission indicated it was investigating the incident.

Tybergerg Hospital spokesperson Laticia Pienaar told News24 on Monday that Williams had been there for four years.

She said Williams had not been suspended or put on leave but that an internal investigation was still ongoing "to establish the facts".