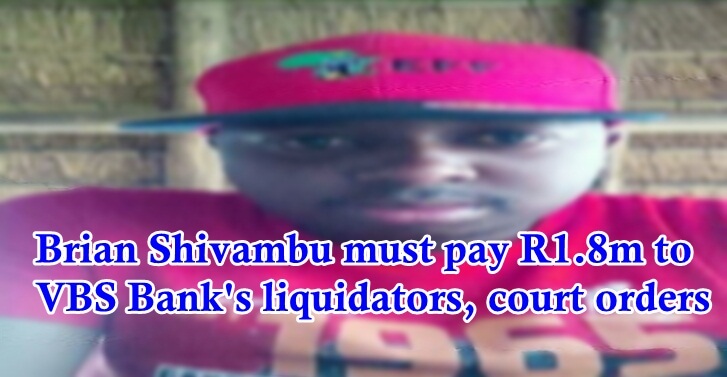 The Gauteng High Court in Johannesburg has ordered Brian Shivambu, the brother of the EFF's Floyd Shivambu, to pay R1.78m to VBS Mutual Bank's liquidators.Â

According to theÂ Mail & Guardian, the order relates to an application Anoosh Rooplal, the liquidator of the now defunct mutual bank, lodged as part of efforts to recover R2.7m that was part of a R4m loan granted to Shivambu's company, Sgameka Projects, in late 2017.

This was revealed in a bombshell investigation report compiled by advocate Terry Motau and released by the SA Reserve Bank in October last year. the report references Brian in a list of 53 individuals and companies who received the largest amounts of money from the bank in a "looting scheme" totalling R1.8bn.

Motau recommended that these individuals and companies, including Brian Shivambu, beÂ criminally charged and held liableÂ in civil proceedings, following the bank's implosion. This includes the bank's former executives and their associates, shareholder executives, politicians and their relatives and auditors who signed off on the bank's "fraudulent" financials.

According toÂ EWN,Â Rooplal said Shivambu would have to pay nearly R1.8m as part of the court order. Shivambu was reportedly in arrears for more than R2.7m. About R1m of this had already been paid since the court case started.

In terms of the judgment, which News24 has seen, Brian has to pay R 1 785 708.60 plus interest at the rate of prime plus 500 basis points calculated daily and compounded monthly from January 24, 2019, to date. He will also have to pay costs on an attorney and client scale.

The judgment is dated August 5.Â

Shivambu reportedly stood surety for the loan to Sgameka by VBS that was signed in December 2017. Sgameka had reportedly undertaken to repay it in 23 instalments of R190 637.24 and a final instalment of R188 555.37.

Rooplal reportedly said that Sgameka breached the loan agreement when it failed to make the monthly payments.Â