Conviction of Mdluli a vindication of rule of law, says Freedom Under Law 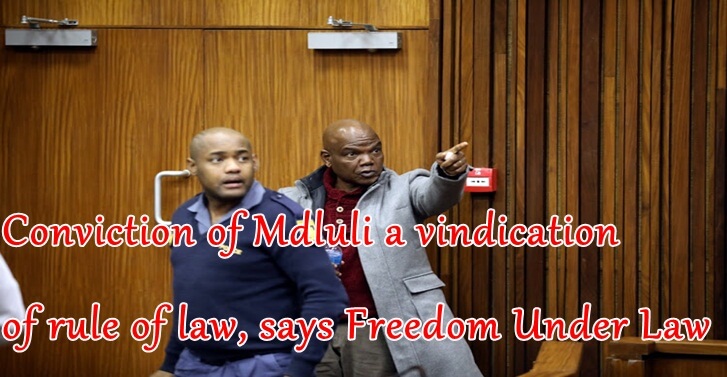 It was an important vindication of the rule of law that Richard Mdluli, SAâs former police crime intelligence head, had been held accountable for some of the crimes he committed.

This was the view of Freedom Under Law, which welcomedÂ Mdluliâs conviction by the Johannesburg high court on TuesdayÂ on counts of kidnapping, assault with intent to cause grievous bodily harm, and intimidation.

The conviction followed a series of legal challenges, over several years, by Freedom Under Law to decisions which would have given Mdluli impunity and kept him in his crucial post as head of police crime intelligence.

In March 2011, Mdluli was charged in relation to the kidnapping and assault of his love rival, Oupa Ramogibe, who was killed in 1999.

In September 2011, Mdluli was charged with fraud and corruption in relation to the alleged abuse of crime intelligence secret funds.

The kidnapping and assault charges were initially withdrawn by Gauteng director of public prosecutions Andrew Chauke. The fraud and corruption charges were withdrawn by former head of the NPAâs specialised commercial crime unit Lawrence Mrwebi.

However, Freedom Under Law successfullyÂ reviewed the prosecutorsâ decisions to drop the charges.

In April 2014, the Supreme Court of Appeal confirmed the setting aside of Mrwebiâs decision to withdraw the fraud and corruptionÂ charges against Mdluli.

The appeal court also reversed the setting aside of Chaukeâs decision to withdraw kidnapping and related charges against Mdluli.

But the fraud and corruption charges were never reinstated.

Mdluliâs trial on the kidnapping and assault charges ensued, and this culminated in Tuesdayâs conviction.

âWhile it is unfortunate that the charges of fraud and corruption were not reinstated by the NPA, it is an important vindication of the rule of law that one of South Africaâs most senior police officers has been held accountable for some of the crimes he has committed,â Freedom Under Law director Nicole Fritz said.

Fritz said it was a cause for reflection that had Freedom Under Law - one of a group of civil society watchdogs - not challenged the decision to withdraw charges and keep Mdluli at his desk, his impunity would have been assured.