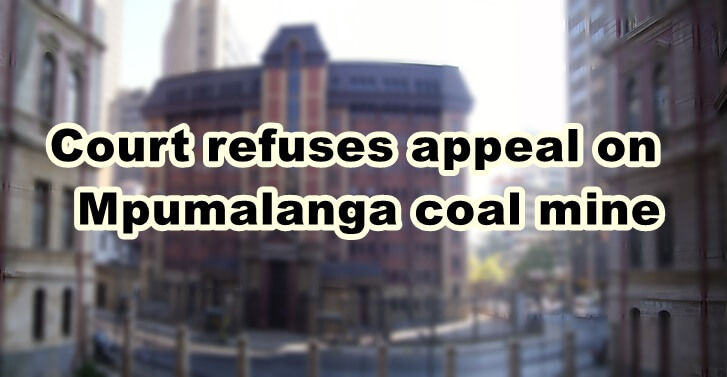 The North Gauteng High Court has refused an application for leave to appeal its decision to overturn the government's hush-hush approval of a new coal mine in a critical biodiversity and water conservation area in Mpumalanga.In November last year, the court upheld an application by a coalition of eight environmental and social justice groups to review and set aside the governmentâs decision to allow the Yzermyn coal mine in the proclaimed Mabola Protected Environment wetlands.

Yesterday, it heard an application by would-be miner Atha-Africa Ventures, a local subsidiary of India-based mining and minerals company Atha Group, for leave to appeal that decision to a full bench of the High Court or to the Supreme Court of Appeal.

The court refused the mining companyâs bid and ordered it to pay the legal costs of the coalition.

The national departments of environmental affairs and of mineral resources, and the Mpumalanga environmental affairs MEC had also applied for leave to appeal the November decision, but withdrew their appeals at the last minute. They were ordered to pay the legal costs the coalition had incurred preparing to oppose their application.

The case is one of five legal challenges to the plan to open the way for the development of the large,15-year-lifespan Yzermyn mine by Atha-Africa.

Mabola has been proclaimed a protected environment where mining is prohibited unless the national ministers responsible for the environment and for mining both grant specific written permission.

This is what happened when the late Edna Molewa, then environmental affairs minister, granted permission for Yzermyn on 20 August 2016, followed three months later by mineral resources minister Mosebenzi Zwane. There were no public statements nor any correspondence with any of the interested and affected parties informing them of this decision.

In his November judgement, Judge Norman Davis found that the ministers should have fully considered the application and not followed a âtick boxâ process. Also, the ministers had acted âprocedurally unfairlyâ by not informing opponents of the proposed mine that they were considering approval for it and by not giving them an opportunity to comment.

Judge Davis set aside the ministersâ approval of the mine and ordered that Atha-Africaâs application be re-submitted for consideration.

The eight members of the Coalition are the Mining and Environmental Justice Community Network of South Africa, groundWork, Earthlife Africa Johannesburg, BirdLife South Africa, the Endangered Wildlife Trust, the Federation for a Sustainable Environment, the Association for Water and Rural Development (AWARD), and the Bench Marks Foundation.

The coalition, represented by the Centre for Environmental Rights (CER), was âvery relievedâ at yesterdayâs refusal of permission to appeal, said CER attorney Catherine Horsfield.

She said the victory had been hard fought and the directions given by the court in the November judgment created a new path for decision-making in protected areas.

âThat path includes taking all available scientific information into account before a decision is made to permit mining in a protected area. It also requires the ministers making a decision under the Protected Areas Act to apply their minds afresh, and not simply rely on other decision-makers having issued other licences.â