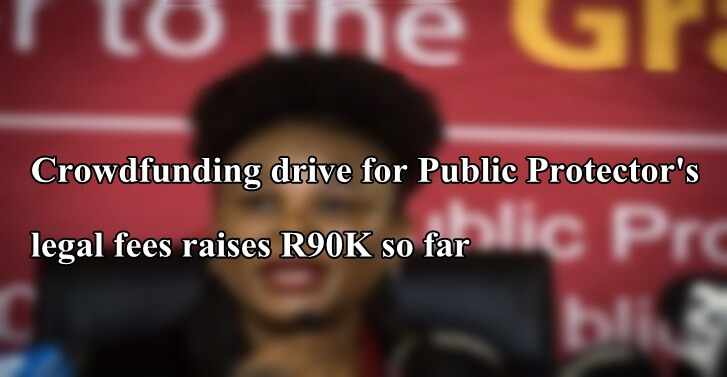 Civil society organisation Democracy in Action has only raised a fraction of its fundraising target for the legal fees of Public Protector Busisiwe Mkhwebane.

The estimated amount the Public Protector has to pay is in the region of R900 000.

"We have received money from ordinary South Africans from as little as R5, with most of the donations ranging between R100 and R500," Democracy in Action chairperson Thabo Mtsweni told News24 on Wednesday.

The fees stem from a Constitutional Court case in which it was found that Mkhwebane's ABSA/Bankorp investigations were flawed. Her report was set aside as well as the remedial action she recommended.

She was ordered to personally pay some of her opponents' legal costs, News24 earlier reported

But the organisation feels that the Constitutional Court's judgment is "unfortunate".

"As the organisation, we feel that the judgment by the Constitutional Court was very unfortunate and the minority judgment supports our view clearly on this matter.

"The judgment sets a wrong precedence for the Public Protector and other Chapter 9 institutions won't be able to perform their duties without fear, favour or prejudice," Mtsweni said.

Democracy in Action said the fundraising campaign was a community initiative and that the organisation was not in communication with the Public Protector.

"Once we have collected all the money, we will then pay the money where it is due. This money is not going to go to the PP or her office," he said.

Earlier this week, Mkhwebane said she was "touched" by the gesture.

"The Public Protector is touched by the generosity and spirit of Ubuntu displayed by the organisation concerned and thank them for their support," Mkhwebane's spokesperson, Oupa Segalwe, said.

Segalwe confirmed that Democracy in Action's efforts were its "own initiative".

He said Mkhwebane would seek legal advice "on the propriety" of accepting the donation,Â Fin24Â reported.