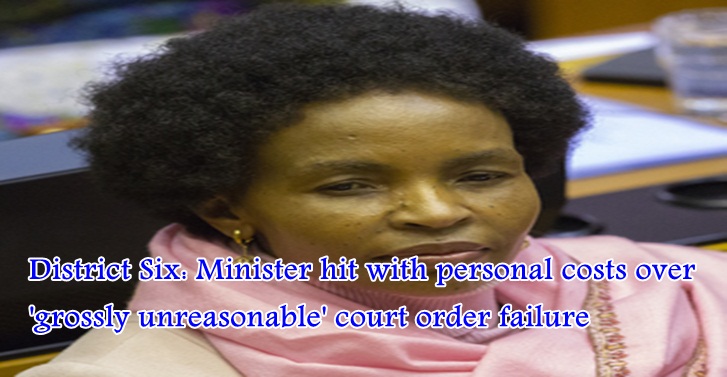 Former Rural Development and Land Reform minister Maite Nkoana-Mashabane was hit with a personal costs order on Friday after the department failed to comply with a court order to draft a plan to redevelop District Six.

Acting judge president of the Land Claims Court, Yasmin Meer, said Nkoana-Mashabane had been "grossly unreasonable" in discharging her duties.

The department, currently headed by new minister Thoko Didiza, was found to have failed to comply with the order, but the personal costs order was issued on Nkoana-Mashabane, who was minister at the time of the complaint.

She was ordered to pay the costs of counsel from April 17, in her own personal capacity.

Nkoana-Mashabane and her department were hauled to court by District Six land claimants after they missed a February court deadline to compile a comprehensive plan to redevelop the area.

She took the stand in the Land Claims Court in May, conceding that she and her department had not complied with the court order.

Nkoana-Mashabane explained that it became clear at the end of February that there were time, legal, and finance challenges regarding a comprehensive plan for the restitution of District Six.

'Relying on hope, not reality'

She said she should have asked for an extension sooner, but had the intention and willingness to fully comply.

"You were relying on hope, not on reality," acting judge Tembeka Ngcukaitobi remarked at the time, to nods from the packed gallery.

The court heard that, while the redevelopment of District Six would cost around R11bn and restitution around R2.4bn, the department could only afford to spend R351m a year.

In her affidavit, Nkoana-Mashabane said that the R1.5m price tag per family unit was "unaffordable and unsustainable".

Advocate Geoff Budlender, SC, appearing for the claimants, had said the evidence was "incontrovertible" that Nkoana-Mashabane's report was not what the court had ordered her to produce.

He said it didn't include the plans for the development, how it would be funded or the timeframe, and was done by "some planning consultants".

Nkoana-Mashabane is now Minister in the Presidency for Women, Youth and People with Disabilities.