July 18: Every Lawyer and Law Students Must Know about this special day 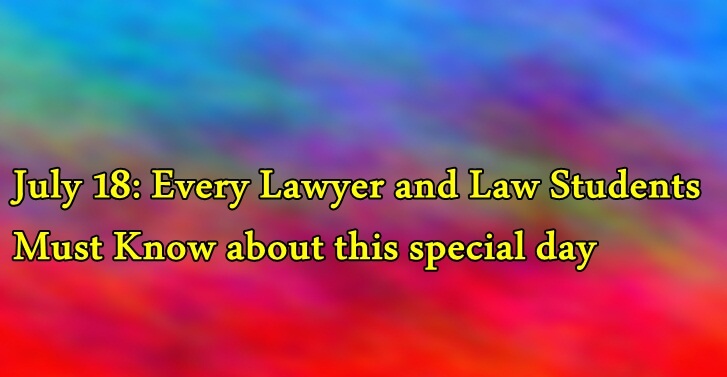 âDo not judge me by my successes, judge me by how many times I fell down and got back up again.âÂ
âÂ Nelson Mandela

The Nelson Mandela International Day is celebrated every year on July 18 since 2009 afterÂ a resolution passed by the United Nations. The United Nations welcomesÂ individuals worldwide to check Mandela Day by having any kind of effect in their communities. âEveryone has the ability and the responsibility to change the world for the better! Mandela Day is an occasion for all to take action and inspire change,â the global body says.

âOur march to freedom is irreversible.
We must not allow fear to stand in our way.âÂ - Nelson Mandela

In addition to the fact thatÂ Mandela was able to add dignity to the struggle for racial justice and save infiniteÂ lives by preventingÂ civil war and helping to create a democratic South Africa, however moreoverÂ he has been able to inspire people all over the world with the example of his life.

âIt is easy to break down and destroy.
The heroes are those who make peace and build.â-Nelson Mandela

He studied law fromÂ theÂ University of Fort HareÂ and theÂ University of Witwatersrand. HeÂ faced racismÂ when he as a student of the University of Witwatersrand because he was the only black African student.Â After finishing his articles at Sidelsky, Mandela worked for the law firm of Terblanche & Briggish for one year. After that, heÂ joined the firm of Helman and Michel as a law clerk for a few months while continuing to study for his entrance exams.Â Mandela startedÂ the first black law firm in South Africa in 1952 with his friendÂ named Oliver Tambo.Â By focusing on providing legal assistanceÂ for Africans who may have otherwise entered the court without proper representation, Mandela and Tambo served as a sort of legal aid and public defender wrapped into one, fulfilling the core mission of the legal profession by providing access to justice.Â

âEducation is the most powerful weapon which you can use to change the world.â-Nelson Mandela

âOn this day, we pay tribute to an extraordinary global advocate for dignity and equality, and one of the most iconic and inspirational leaders of our time.Â  Nelson Mandela exemplified courage, compassion, and commitment to freedom, peace, and social justice. Â He lived by these principles and was prepared to sacrifice his liberty and even his life for them.Â

Nelson Mandelaâs calls for social cohesion and an end to racism are particularly relevant today, with hate speech casting a growing shadow around the world.Â  As we work collectively for peace, stability, sustainable development and human rights for all, we would be well served to recall the example set by Nelson Mandela. Â

Our best tribute is found in actions. Â Nelson Mandelaâs message to the world is clear.Â  Every one of us can step up and act for enduring change. Â We all have the duty to do so. Â On this day of reflection on Nelson Mandelaâs life and work, let us embrace his legacy and aspire to emulate his example.â-AntÃ³nio Guterres

Recognizing Mandela as the ideal lawyer is the kindÂ of reorientation that would highlight the real tangible goods that lawyers in South Africa can contribute to society today, including the ability to help provide access to justice and create civic cohesion.