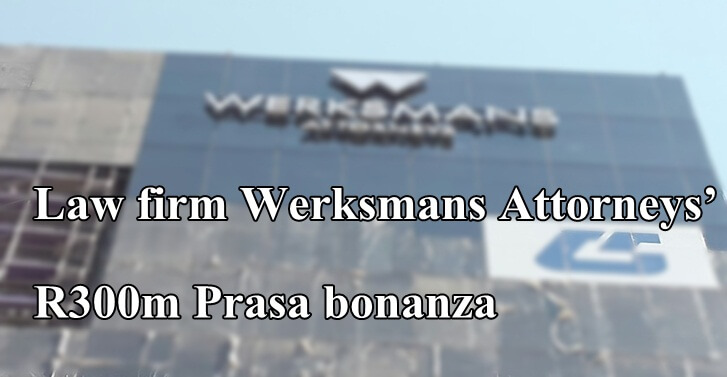 The Sunday Independent can on Sunday reveal that the law firm was paid the amount after submitting 155 invoices between February 2016 and April this year.

According to official documents - including invoices, payment records and the âterms of engagementâ - Werksmans charged the state-owned company up to R12m per invoice, excluding costs for travel, accommodation, telephone, printing and independent counsel.

It billed Prasa up to R4300 per hour for work performed by a director with more than 15 years as an admitted attorney, R2300 per hour for a senior manager and R432 for a junior accounting analyst.

On Saturday, Zenani defended Prasaâs procurement process but sidestepped questions about the R300m payment and the AGâs findings that Werksmansâ appointment and payments were irregular.

She said the board, chaired by ANC veteran Popo Molefe, had taken a decision to appoint Werksmans after auditor-general Kimi Makwetu and Public Protector Busisiwe Mkhwebane âexpressed grave concerns about the paucity of the co-operation that they were receivingâ from Prasaâs management.

âWerksmans was appointed on the basis that they were on Prasaâs panel of attorneys. At the time, the AG was finalising the annual audit of Prasa and the public protector was conducting an investigation that had commenced in 2012. The board appointed Werksmans to do a deeper investigation into the findings of the AG.

âThe amounts paid to Werksmans and its subcontractors, which included Ngubane and Associates, was in accordance with the contract that was entered into between Prasa and Werksmans.

âPrasa respects the findings of the AG and will attend to what is necessary to demonstrate that respect.â

In the reports, Mkhwebane made adverse findings against both Gordhan and Pillay.

Werksmans was also part of the National Treasury investigation into allegations of fraud and corruption at the VBS bank, conducted by advocate Terry Motau last year.

He also asked it to âprovide executive summaries of the investigation reportsâ that were submitted by Werksmans to Prasa.

This came after the AGâs reports for the 2016/17 and 2017/2018 financial years found that Werksmansâ appointment and its payments, to the tune of R148 million at the time, were irregular.

Former Prasa GCEO Nkosinathi Khena had appointed Werksmans from a panel of law firms in August 2015 to investigate 141 contracts above R10m.

This was after the attorney-generalâs 2014/2015 report had found that R550m worth of contracts awarded during the tenure of former GCEO Lucky Montana were irregular.

In his âintervening witness affidavitâ deposed to the North Gauteng High Court in April this year in the on-going court case between Prasa and one of the contractors, Siyangena Technologies Pty Ltd, Montana claimed that Werksmansâ appointment was âfraudulentâ.

âThe appointment of Werksmans Attorneys was not only irregular but, in my view, a fraudulent act by the chairperson of the boardâs audit and risk committee, Ms Zodwa Manase.

âIn a letter written by the former Interim chairperson of the Prasa Board, Adv T Makhubela SC, he records the appointment of process.

âTo his surprise, Werksmans Attorneys had emerged to replace Ngubane and Associates as Lead Investigator, without his knowledge or being authorised,â Montana said in the affidavit.

On Saturday, he added that Werksmansâ appointment would form part of his testimony before the Zondo Commission later this month.

He accused the law firm of âconducting illegal surveillanceâ on him, since he was forced out of Prasa in 2015, through its subcontractors including a company allegedly owned by Pillay and other former members of Sars rogue unit.

âWhen this costs over R300m or anything closer to R300m is because the bulk of it has got nothing to do with forensic investigations. It has got more to do with illegal surveillance by Werksmans through these different companies. They are working with Ivan Pillay. The rogue unit of Sars that you guys wrote about is actually involved in this investigation by Prasa contracted by Werksmans via (forensic specialist firm) BCPS (Basileus Consilium Professional Services).â

BCPS could not be reached for comment on Saturday.

Manase on SaturdayÂ labelled the allegations as factually incorrect.

âNo individual non-executive director has the power to unilaterally appoint any supplier.

âAs the chairperson of the audit risk committee, I firmly believe in and complied with governance, ethics and proper company policiesâ.

On Friday, Werksmans Attorneys defended its appointment as lawful but refused to confirm payments or comment further.

âWe are now rehashing entirely old information. The appointment of Werksmans was entirely lawful. Itâs not appropriate to go on the amounts that were paid. Our appointment was lawful, it was found to be lawful by a court of law. We are not going to lower ourselves by commenting further on this matter,â said Hotz.

Earlier, the law firm had given more details in response to Prasaâs request for an explanation.

In response to Molepeâs letter last year, Manaka, one of the law firmâs directors, had said: âThe Prasa Board identified Werksmans as the service provider from its panel of attorneys with the required expertise and experience to perform the forensic investigations.Â

âMeetings were held between representatives of the Prasa board, the head of Prasa legal department and Werksmans, which culminated in a formal letter of engagement which contains the terms of engagement dated 5 August 2015,â said Manaka, adding, âwe trust the explanation provided as requested will suffice.â