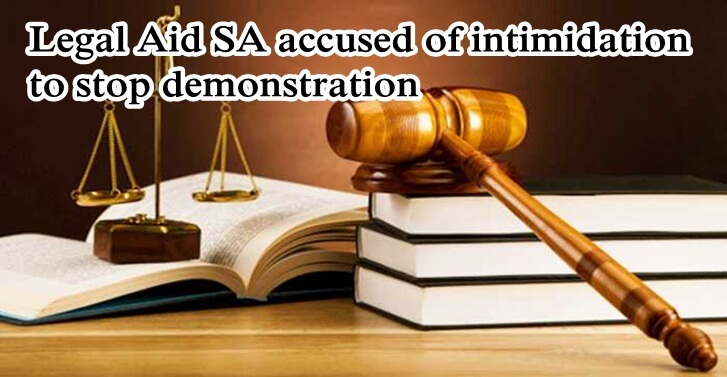 As part of a build-up to a full-blown strike, workers will today hold demonstrations at the public legal agencyâs Braamfontein offices.

Legal Aid South Africa has been accused of using intimidation tactics to discourage workers, including lawyers and support staff, from taking part in todayâs planned demonstrations.

An internal memo â the contents of which workers believe are crafted to thwart support for the demonstration â sent to staff reminds workers intending to participate that their actions would not be protected by the Labour Relations Act but by the Regulation of Gatherings Act.

The memo, sent out this week by the human resources department, reminds workers that the agency did not agree with the demonstration at the Council for Conciliation, Mediation and Arbitration (CCMA).

Since the demonstrations will be taking place during working hours, the âno work, no payâ principle will be applied for a minimum of half a day to a full day for those participating, the memo stated.

Michael Motaung, one of the agencyâs lawyers at the forefront of the action, said they received calls from worried workers after the memo was sent out on Monday afternoon.

âWe have had to meet workers and tell them there was nothing to worry about because this message is intended to sabotage the demonstrations so that there is no support and, therefore, no impact,â he said.

As part of a build-up to a full-blown strike, which could, if not averted, bring the justice system across the country to a halt, workers will today hold demonstrations at the public legal agencyâs Braamfontein offices.

Workers claim Legal Aid SA has failed to address their safety concerns, with people simply walking into their offices to attack them, despite, according to the Legal Aid SAâs annual report, the costs of security at the agency increasing from R2,144,152 in 2017 to R2,258,71 last year.

They are also aggrieved by a debilitating workload which, they said, compromised quality at the expense of the accused, who depend on Legal Aid lawyers for justice.

Legal Aid SA chief operating officer Dr Jerry Makokoane denied that the memo was to intimidate, saying they were simply engaging staff to detail the regulations around the intended action to ensure compliance with the relevant laws.

âEmployees also understand that their right to a peaceful demonstration is exercised in terms of section 17 of the Constitution, enabled by the Regulation of Gatherings Act.

âThe internal staff memo states that no intimidation, victimisation or unfair discrimination will be allowed on the part of any Legal Aid SA manager or employee [partaking or not partaking in the demonstration],â he said.

Makokoane said it was impractical to assume those participating in a mass demonstration between the times they indicate will be in a position to return to their work stations or court, as they suggested.

âAgain, while Legal Aid SA respects the constitutional right of employees to demonstrate, meeting our operational requirements is of equal importance,â he said.