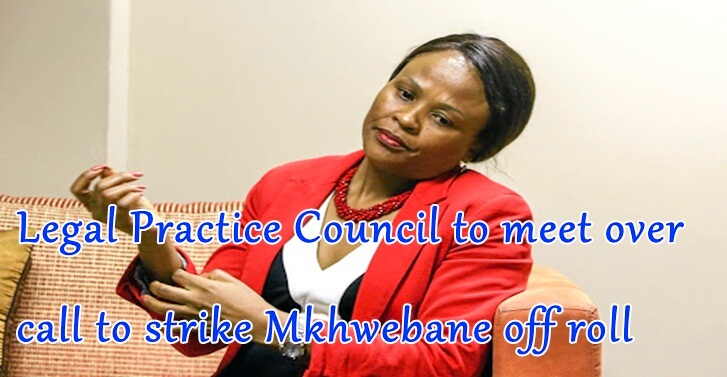 The Legal Practice Council (LPC) will on Friday deliberate on a call for public protector Busisiwe Mkhwebane to be struck from the roll of advocates.

And the National Association ofÂ  Democratic Lawyers (Nadel) has called on Mkhwebane to resign immediately and for her conduct to be investigated.

The LPC was responding to a letter from Accountability Now director Paul Hoffman SC on Monday, following a scathing judgment by the Constitutional Court on Mkhwebane's conduct.

The courtÂ dismissed her appeal against a high court order that she must pay some legal costs from her own pocket. The cost order was granted after a report by Mkhwebane into Absa and the Reserve Bank was taken on judicial review.

The court found that Mkhwebane was dishonest and had lied under oath.

Immediately after the judgment Hoffman wrote a letter to the LPC notifying the council about the outcome.

Hoffman said in his letter that there were serious, final and unappealable findings reflecting on the honesty, integrity and competence of the public protector - a duly admitted advocate of the high court.

âKindly confirm that the council is looking into the matter with a view to bringing an application for the striking off the roll of advocates of Ms Mkhwebane as part of its legislated disciplinary functions. We have copied her on this email,â Hoffman said in his letter on Monday.

In its response to Hoffman, LPC acting CEO Charity Nzuza asked that council be afforded time to review the Constitutional Court judgment and its implications.

Hoffman wrote a follow-up letter, saying it would be helpful if the LPC was able to put a time frame on its investigations.

Nzuza replied that council was deliberating on the matter on Friday. âThe LPC will respond soon after this meeting,â Nzuza said.

Following Accountability Nowâs request to the LPC, the National Association ofÂ  Democratic Lawyers (Nadel) called on Mkhwebane to resign immediately and for her conduct to be investigated by the council, with a view to establishing whether she was fit and proper to remain on the roll of advocates.

"Nadel is firmly committed to restoration of the integrity of the office of the public protector, and the realisation of independent, accountable, responsive and open public representatives based on the principles in our constitution,â Nadelâs national secretary, Nolitha Jali, said in a statement.Â