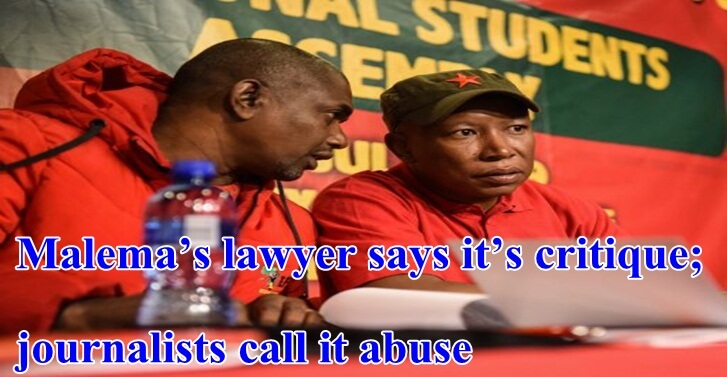 Sanef wants the EFF to take responsibility for instances of harassment against members of the media.

The actions of Economic Freedom Fighters (EFF) leader Julius Malema and his supporters has had a negative impact on press freedom, as those who were on the receiving end of the attacks feared reporting on the party or its leader, the Equality Court in Pretoria heard yesterday.

âSome of the journalists have toned down their reporting because of the fear that they may be subject to attacks by the (EFF) and their supporters if they report critically on the party,â SA National Editorsâ Forum (Sanef) advocate Daniel Berger said.

Sanef and five journalists approached the court to hold the party liable for promoting harassment against journalists, to stop Malema from threatening journalists on social media, and to publicly apologise to those who have allegedly been harassed.

The journalists â Adriaan Basson, Pauli van Wyk, Ranjeni Munusamy, Barry Bateman and Max du Preez â argue that the utterances on social media by the EFF resulted in them being threatened.

In affidavits, Van Wyk detailed how she was subjected to abuse on Twitter after Malema called her âSatanâ and Basson deposed how Malema refused to condemn a Twitter user who threatened to kill him, with Berger submitting that this should be viewed as an âendorsement of violenceâ.

After alleged attacks, Munusamy has found it difficult to do her work, and the aim of the attacks were to shut her up and stop her from writing stories critical of the EFF.

Berger said the EFF had created or enabled an environment in which abuse, intimidation and harassment of journalists was encouraged.

Advocate Thembeka Ngcukaitobi for the EFF disagreed with Berger, saying Malemaâs utterances were critical of journalists but certainly not a message that journalists must be killed.

He said journalists were not immune to criticism and that the applicant had failed to demonstrate to the court that they operate from a prohibited ground.