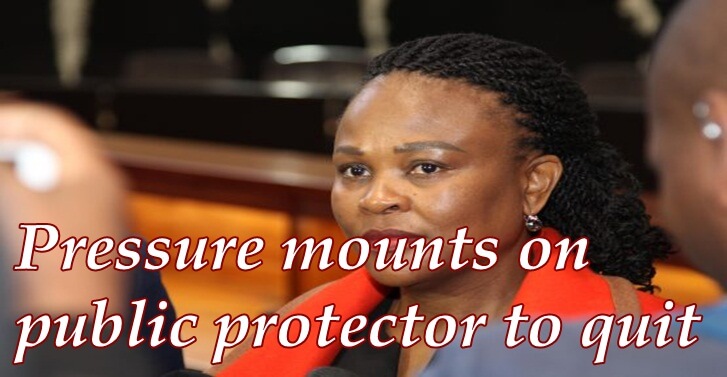 Pressure is mounting on South Africaâs anti-graft ombudsman to quit after the nationâs top court ruled she lied under oath, with a civil rights group lobbying for her to be struck from a lawyersâ roll.

Public protector Busisiwe Mkhwebane has ignited a political storm since taking office in 2016, finding President Cyril Ramaphosa in breach of the constitution and proposing changes to the central bankâs mandate. Her critics accuse her of legal incompetence and siding with a ruling party faction loosely aligned to former leader Jacob Zuma that has sought to undermine Ramaphosa and his campaign to tackle graft.

Rights group Accountability Now said itâs petitioned the Legal Practice Council to revoke Mkhwebaneâs status as an advocate â a lawyer whoâs allowed to present cases in the high courts and Supreme Court of Appeal. The council, a statutory body, will discuss the matter on Friday.

âIf she is struck off the roll, the next step is to go to parliament and say she no longer has the capacity to fullfil her function,â Paul Hoffman, a director at Accountability Now, said by phone on Thursday.

South Africaâs Constitutional Court on July 22 upheld a High Court ruling that Mkhwebane didnât understand her constitutional duty in rulings she made in 2017 about the countryâs central bank. Mkhwebane put forward âa number of falsehoodsâ while litigating and acted in bad faith, the apex court said.

A day earlier, Ramaphosa described Mkhwebaneâs finding that he violated the constitution and executive ethics code when he misled lawmakers about a campaign donation as âfundamentally and irretrievably flawed,â and said heâd seek an urgent judicial review. The president insisted he didnât know about the payment made to his campaign to win control of the ruling party, inadvertently failed to disclose it and rectified his mistake as soon as possible.

Public enterprises minister Pravin Gordhan, who Ramaphosa appointed to stamp out rampant graft at state companies, has filed lawsuits challenging the Public Protectorâs findings that he oversaw an illicit intelligence unit at the national tax agency more than a decade ago and illegally approved the early retirement of one of its top officials when he was finance minister. Successful challenges would give Mkhwebaneâs detractors further ammunition.

Sheâs also courted further controversy by deciding to investigate whether Ramaphosa administration followed due process when it appointed a new head of South African Revenue Service, and allegations of maladministration in the agencyâs recruitment processes.

Mkhwebane, who previously worked at the state security agency and was appointed during Zumaâs scandal-marred rule, has denied playing politics and accuses her critics of trying to stymie her investigations. Sheâll oppose any bid to be struck from the lawyersâ roll, her spokesman Oupa Segalwe said by phone.

The main opposition Democratic Alliance has asked parliament to probe Mkhwebaneâs fitness to hold office and the legislatureâs justice committee will decide whether an inquiry is necessary. Parliament will go into recess on Friday for three weeks, delaying the conclusion of the process.

Firing the public protector requires the backing of two-thirds of lawmakers, and itâs unclear whether that threshold could be reached given deep divisions within the ruling African National Congress, which holds 230 of the 400 seats in parliament.

The fissures were starkly illustrated by revelations that Derek Hanekom, a Ramaphosa ally and member of the ANCâs National Executive Committee, collaborated with the opposition Economic Freedom Fighters in a bid to oust Zuma â which the ruling party eventually did in February last year.

ANC Secretary-General Ace Magashule, who is closely aligned to Zuma, said in a statement on Wednesday that Hanekom was âa charlatanâ who was intent on dividing the party. Carl Niehaus, a Magashule aide, told Johannesburg-based broadcaster eNCA that Hanekom should be expelled from the party.