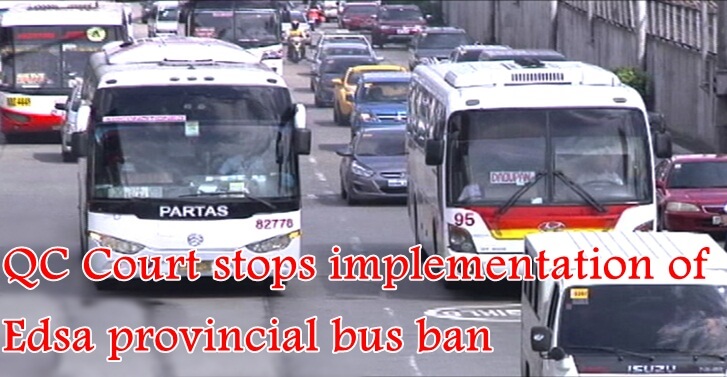 In an order dated July 31 and released on August 2, the Quezon City Regional Trial Court Branch 223 has granted the writ of preliminary injunction filed by 18 transport groups against the scheme.

The QC court said it found âjust causeâ to stop the ban and schedule the case for hearings.

The court said it needs to hear the side of the defendants of the case â the Metropolitan Manila Development Authority (MMDA) and the Land Transportation Franchising and Regulatory Board (LTFRB) considering that âthe matter on hand greatly impacts the welfare of the public.â

The proposed policy of the MMDA and the LTFRB prohibits provincial buses from traversing Edsa to decongest traffic. It also seeks to revoke business permits and shut down the operation of all provincial bus terminals located along Edsa.

AÂ dry runÂ for the policy is supposed to begin on August 7.

The court notes in its order that these measures would have âfar-reaching effectsâ to the businesses, employees and other contracts of provincial bus companies. It added that the shortened routes would also affect the salary of employees.

âWhile as a rule, the right to income or earning does not prevail over public welfare, in the instant case since the Court has as yet not been presented with a clear basis or sufficient justification for the issuances, there is no reason to consider these issuances to have priority over the Plaintiffsâ rights as well as those that would suffer from their implementation,â the order read.

The court also asked the MMDA and the LTFRB on why point-to-point (P2P) buses are given privilege of plying Edsa even if their sizes were similar to those of regular buses.

It further said that since the said agencies failed to file a response, âno explanation or study has been presented to this Court to aid the latter in determining whether the provincial buses are indeed the cause of âhorrendous trafficâ and if their ban and closure of their terminals is the best solution.â

âIn view of the absence of any evidence on behalf of the Public Defendants, the evidence provided so far by the Plaintiffs tend to show that indeed, there was abuse in the issuance of the subject LTFRB MC and MMDA Regulation,â the order read.

The court gave the Office of the Solicitor General (OSG), which represents the MMDA and the LTFRB, until August 14 to file a response to the case.